Every once in a while, a new technological development shakes up a conservative sector. In the oil and gas industry, the shale revolution has changed the business in multiple ways. The U.S. has been transformed from one of the world’s leading oil importers into the world’s largest producer of oil and gas. Fracking in the Permian basin has created bottlenecks as the existing infrastructure cannot cope with rising production. Producers are not able to get all the oil and gas to customers, creating a price differential with the WTI benchmark. On average, shale oil producers in the Permian basin receive $10 to $13 dollars less for each barrel compared to WTI levels.

It is not only energy companies that are benefitting from rising production, pipeline manufacturers are also reaping the rewards. Globally, the U.S. ranks no. 1 in pipelines planned and under construction. Most of the oil and gas pipelines planned for 2019 and 2020 will connect the Permian Basin with consumers and export terminals in the Gulf of Mexico. However, the additional capacity will create another problem by moving the bottleneck from transportation to the facilities on the coast.

With the need for additional pipelines rising fast, Texas has become the epicenter of a booming industry. The Lone Star State produces 40 percent of the national oil production, production that the Energy Department estimates to be 11.6 million barrels per day. In Texas, companies are investing $40 billion in building or expanding 10,000 miles of pipeline, which is enough pipeline to reach from West Texas to China.

Until the end of 2019, at least three large pipelines will be put into action, raising capacity by an additional 2 million barrels per day. However, this comes at a time when existing facilities have a limited unused capacity. The added pipeline infrastructure will exceed the available capacity at export facilities by a large margin. Several additional facilities have been announced, each in a different stadium of planning. However, it is likely that not all plans will come to fruition. 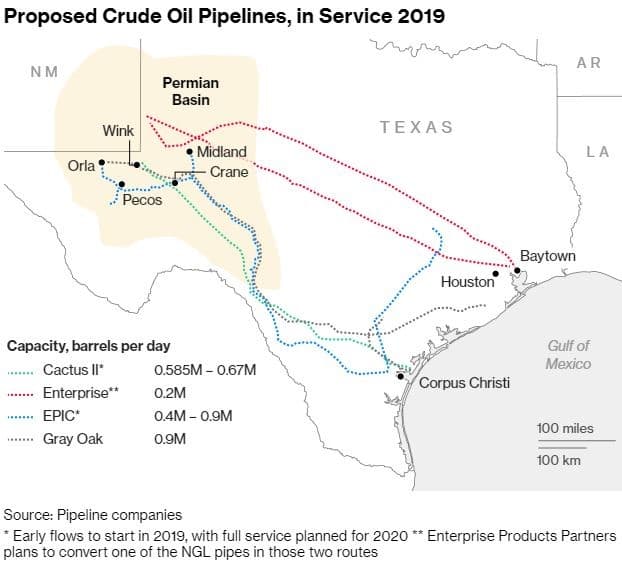 According to James Teague, CEO of Enterprise Products, “anyone can build a terminal, but it’s what’s behind that terminal that determines its success.” In other words, success in the terminal business is as much about securing the barrels as it is about shipping them out. Some companies have an edge due to two reasons: early planning such as Trafigura or those with interests in production, transportation, and the terminals itself such Enbridge Inc.

Trafigura is, to date, the only company that has submitted a formal permit application to build a deep-water terminal in the Corpus Christi area. Being the first to complete a facility would diminish the necessity of additional terminals as these facilities don’t come cheap – costing in the range of billions. However, being the first to apply doesn’t determine whether you’re also the first to finish the facility as environmentalists are trying to delay construction.

Furthermore, the rate of success is also determined by supplies and the designated route of pipelines. The majority of export infrastructure is located in two regions: Houston and Corpus Christi. Companies in these areas are battling to become the country’s largest and most important location for moving American oil overseas. Each region shipped out more than $7 billion in crude during the first nine months of this year compared to just one billion two years ago.

Finally, a wild card for investors is the additional rise of shale oil production in the coming years. This could determine the construction of additional infrastructure to be commissioned in 2020. 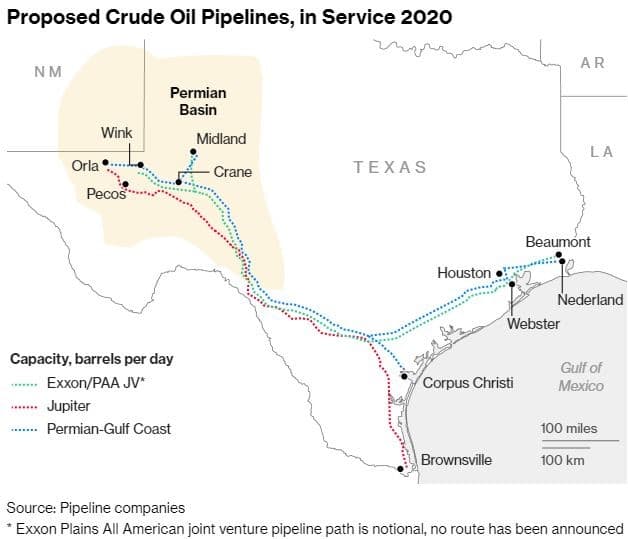 The recent decision of the U.S. and China to halt all trade-related hostilities for 90 days is good news for the global economy and especially good news for the American oil and gas industry. First, the trade war negatively affected the global economy, which in turn reduced the growing demand for oil. The positive news coming from the sidelines of the G20 summit in Buenos Aires has improved the outlook for global energy demand, at least for now.

Furthermore, the construction of pipelines and export facilities requires buyers to make investments profitable. China is the largest growth market for oil and gas. Beijing could agree to buy more American energy to reduce the trade deficit. However, the truce of the G20 summit is not a peace agreement. Therefore, American energy companies could be facing a bumpy year in 2019.

The Race Is On to Protect Data From the Next Leap in Computers. And China Has the Lead