Iraq will play a crucial part in meeting global oil demand over the next decade, according to a new report from the International Energy Agency (IEA).

Iraq is expected to add 1.2 million barrels per day (mb/d) through 2030, the IEA projects, which is the third largest increase out of any other country in the world after the U.S. and Brazil.

Already OPEC’s second largest producer, Iraq has succeeded in ramping up production to nearly 4.5 mb/d in 2018, a remarkable achievement given where the country has been in recent years. As a result, Iraq has played a pivotal role in global supply. “Iraq’s oil sector has navigated well a very turbulent period in the last decade, managing to nearly double its output despite the war against ISIL and large swings in the oil price,” the IEA wrote. “As a result, Iraq has accounted for around one-fifth of the net increase in global supply over this period, and is now the fifth largest producer in the world.” 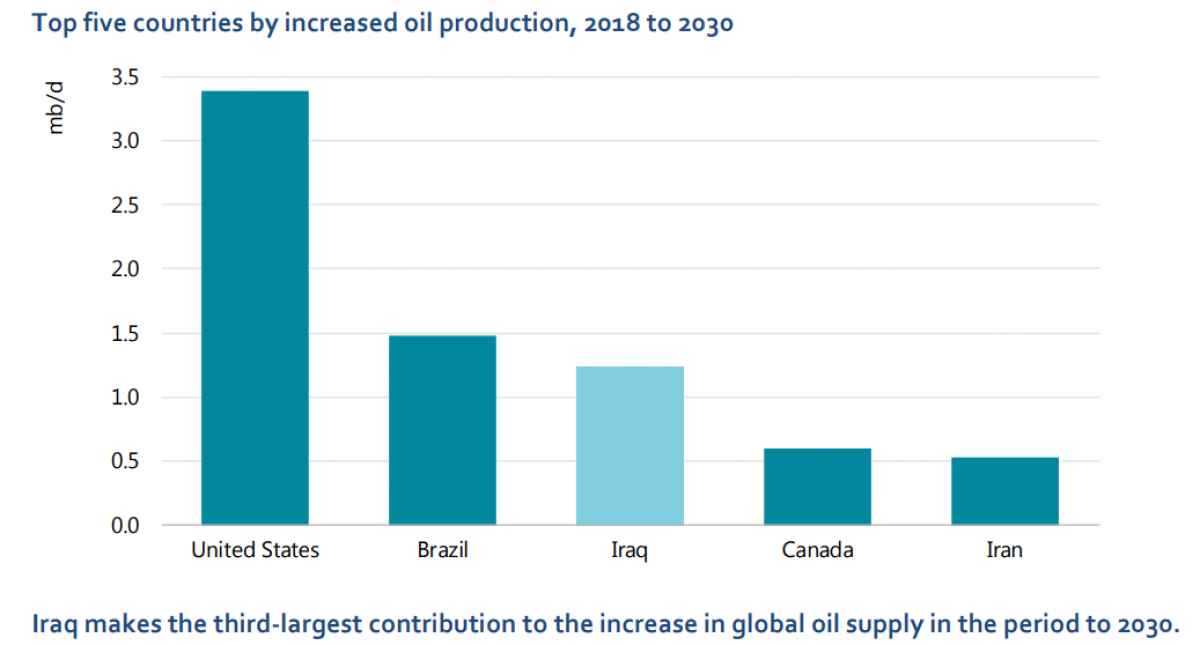 But there is no shortage of challenges facing Iraq, and the assumed increases “cannot be taken for granted,” the IEA cautioned. Obviously, volatile oil prices, and the prospect of a peak demand loom over the horizon. However, Iraq faces several unique hurdles that aren’t necessarily prominent issues elsewhere, including having sufficient water for injection, attracting foreign capital, and maintaining a stable political and security environment.

On the first point, the IEA notes that having enough water to inject into its oil fields will be a critical element in Iraq growing its oil production. “Without it, production rates could struggle to climb much beyond their current levels,” the IEA warned. In order to reach the 6 mb/d of oil production by 2030, Iraq needs an additional 3 mb/d of water for injection.

Meanwhile, Iraq may also struggle with having too much heavy oil and not enough refining capacity to handle it. The country’s largest oil refinery, the Baiji refinery, was damaged during the war against ISIS years ago and has not been fully repaired. The country’s crude slate is skewed towards heavy fuel oil, but it does not have the ability to process much of it. As a result, it imports refined fuels at a cost of around $2 to $2.5 billion per year, the IEA said.

This could become a bigger problem heading into 2020 as rules on sulfur concentrations in marine fuels take effect. Global demand for heavy fuel oil is expected to plunge, which could force deeper discounts for Iraqi heavy high-sulfur oil.

Meanwhile, Iraq has adequate supplies of natural gas but has been flaring gas at increasing rates as oil production climbs. Gas is needed for power generation and Iraq has resorted to importing larger volumes from Iran to feed its power plants even as it flares its own gas. “The anticipated increase in oil production will bring with it a commensurate increase in associated natural gas,” the IEA said. “The amount of attention Iraq has paid to gas in the past, as well as the volumes that have been produced, has sorely lagged behind that of oil.” Gas flaring surged by more than a third from 12 billion cubic metres (bcm) per year in 2012 to around 16 bcm in 2018.

The IEA offered some recommendations for the array of problems Iraq faces, including expediting water projects so that the country’s southern oil fields have enough water for injection; implementing gas flaring reduction projects in the next two years; and fully restoring the Baiji refinery.

These are serious challenges, but ones that the IEA feels are manageable. If they can be overcome, Iraq can produce as much as 6 mb/d of oil by 2030.

However, this is not the first time that the IEA has been bullish on Iraq’s oil sector, and notably, the most recent outlook is decidedly more modest than previous iterations. In 2012, the IEA put out a special report on Iraq’s energy sector, in which it predicted that Iraq’s oil production would double from 3 mb/d in 2012 to more than 6 mb/d by 2020 and 8.3 mb/d by 2035. The IEA even laid out a more remote but optimistic scenario that held out the possibility that Iraq could hit 9 mb/d…by 2020.

The IEA now thinks that Iraq can reach 6 mb/d by 2030, which is a decade later than it previously thought. Still, with output at around 4.5 mb/d (down from 4.7 mb/d in January due to the OPEC+ agreement), the goal laid out seems to be within reach.

As always, though, the long list of “above-ground” obstacles in Iraq – political gridlock, security challenges, attracting foreign capital, and water scarcity – will be very challenging to overcome.