Attacks on Sept. 14 apparently conducted with cruise missiles and drones targeted the Abqaiq and Khurais crude-processing and stabilization facilities belonging to Saudi Arabian Oil Co., knocking 5.7 million barrels per day of crude oil production offline — 5 percent of the global daily total. Although Yemen’s Houthi rebels quickly claimed responsibility, the United States asserted that the attacks did not originate from Yemen and were conducted with Iranian help. Details released in the aftermath of the attacks seem to corroborate at least the U.S. claim that they were launched from outside Yemen.

If this was indeed Iran directly attacking targets in Saudi Arabia, it marks a brazen escalation in its efforts to maintain and strengthen its political and military standing in the Middle East and Persian Gulf. It would also track with Iranian efforts to seek relief from increasing U.S. pressure. Iran has demonstrated with a number of recent attacks that it is willing to aggressively push back against the United States and its allies as it tries to break the current cycle of heavy oil sanctions and economic pressure.

With the United States blaming Iran, the odds that the United States or its allies would retaliate militarily against Iranian-linked targets, if not Iran itself, have risen significantly. In the hours after the attack, U.S. President Donald Trump stated that the United States was “locked and loaded” and waiting for final verification of Iranian involvement before deciding how to respond. The Iranians undoubtedly understand that attacks such as these could provoke a U.S. military response, but they are clearly willing to accept that risk and may even calculate that Trump would not be willing to chance a serious and highly damaging military conflict in the lead-up to the 2020 U.S. presidential election. Alongside these attacks, the Iranians are also seeking to drive a parallel negotiation, mostly through the Europeans, to offer an alternative path toward de-escalation that the Americans could take.

The Case Against a Houthi Attack

Given the facilities’ geographic location, the Saudi air defense focus on Yemen, the angles of impact, the overflight reports over Kuwait and debris recovered from a failed cruise missile, it is quite likely that the attacks came from Iraqi or Iranian territory — or both. It is also possible that some of the drones could have been sea-launched. Regardless, the attack vector these details indicate more directly implicates Iran and/or its direct proxies in Iraq, increasing the danger of escalation. U.S. officials concluded in May that an attack on Saudi pumping stations originated from Iraq. Although that incident left only a fraction of the damage as the destruction of Sept. 14, it drove home how Iraq could be used as a staging ground for attacks on Saudi oil infrastructure. 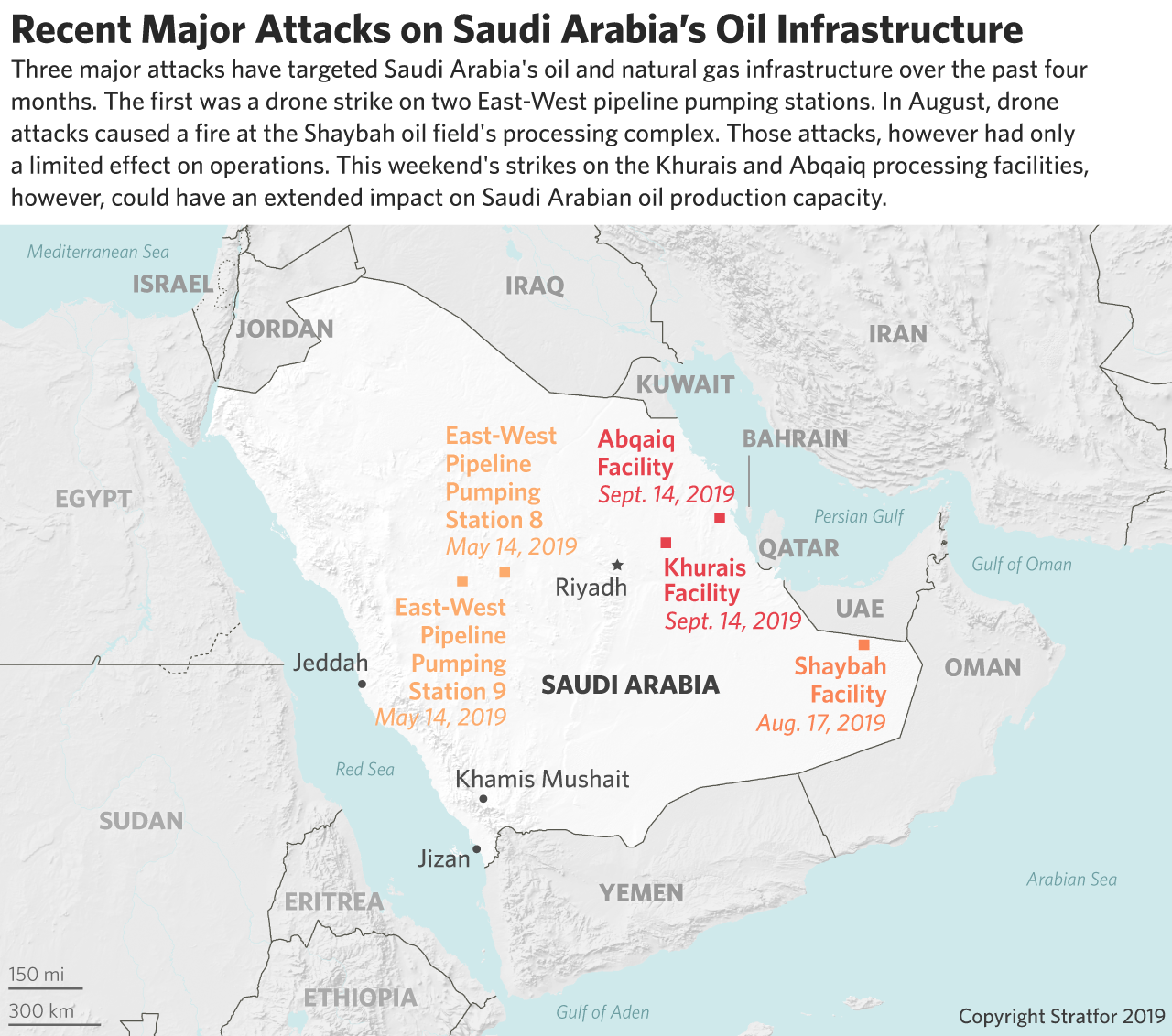 An attack of that magnitude, however, will decrease the likelihood that the United States would be able to hold meaningful talks with Iran in the short term. The White House has already taken a generally hard-line stance on Iran, and the United States will be loath to back off in the aftermath of this major assault. It will not want to project weakness by allowing Iran to dictate events and will be concerned that too soft a response would send a message that could encourage other states it has disputes with, such as North Korea, to act provocatively. In addition, as the global hegemon, the United States has a vital stake in preserving the free flow of commerce and energy resources.

The United States now faces a difficult decision. Washington may calculate that an attack of this magnitude on critical Saudi oil infrastructure requires a military response to establish deterrence. But thus far, Trump has been unwilling to take actions that could escalate U.S. military commitments in the Middle East as Washington seeks to shift its focus and resources to the Western Pacific and Europe. Therefore, the United States will likely seek to commit to a response in conjunction with local allies, placing an added emphasis on the reactions by Riyadh and Abu Dhabi.

Saudi hesitance to embroil itself in a major conflict is clear already. Saudi and U.S. intelligence so far agree that cruise missiles were used in the attack, but Saudi Arabia has stopped short of concurring with the U.S. assessment that Iran provided the staging ground for the attack. Riyadh’s cautious response reflects Saudi Arabia’s general course of risk avoidance and its desire to avoid the disruption of a major Gulf conflict. If the attack came from Yemen, Riyadh would face an easier, albeit still costly, choice of further pummeling the Houthis there. This course would not require a strategic readjustment since the Saudis are already heavily engaged there. But with the evidence pointing toward the attack originating from Iraq or from Iran, the Saudis now face the decision of supporting a U.S. military response at the risk of escalation in its struggle to contain Iran. And despite a clear hesitance to stoke a broader conflict, the attack confronts Saudi Arabia with the clear, glaring vulnerability of its oil and gas infrastructure in a way that could drive Riyadh to support a U.S. military response.