To say that the last few weeks in the crude markets have been volatile feels like an understatement. With prices surging in the wake of the Saudi attacks followed by an incredible decrease in the price per barrel, it has been a turbulent period. 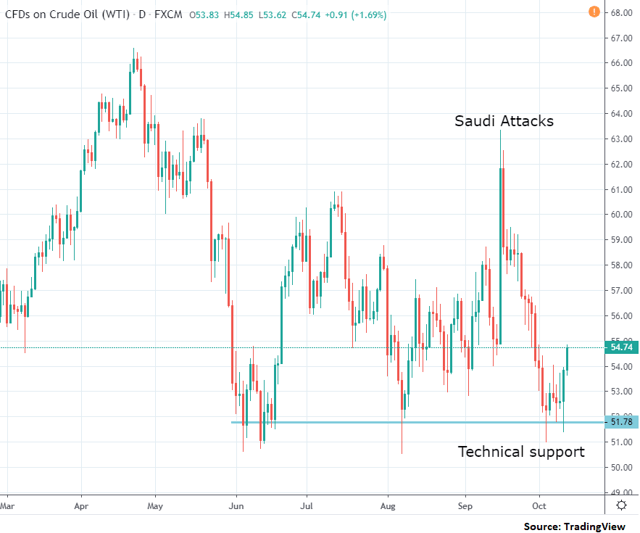 In the following discussion, I will walk through the key reasons why I believe that the crude markets remain fundamentally tight and bullish. I believe that the market is seriously mispricing the OPEC cuts and that in the coming months, the price of crude oil will strongly increase.

In the following discussion, I will walk through the key elements which make up the balance: supply and demand. The way that I comprehensively study the balance is through an examination of the five-year range of inventories. As you can see in the following chart, crude inventories are currently sitting around the five-year average on the back of an incredible decline in crude stocks this summer. 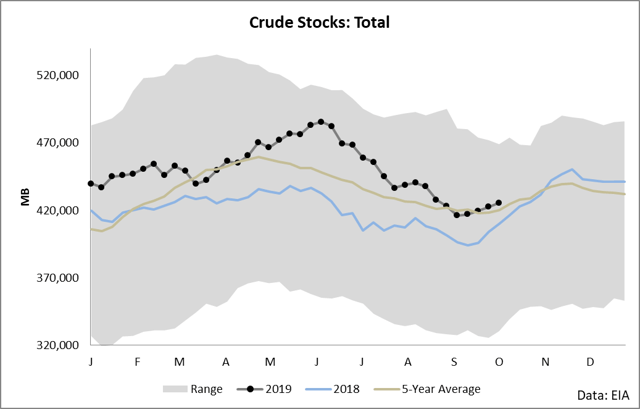 The decline in crude stocks is just a warning of what I believe will be coming to the crude markets. Specifically, I believe that in the coming weeks, we will see the year-to-date draw continue into one of the lowest levels seen (a level which we are just shy of at this point). 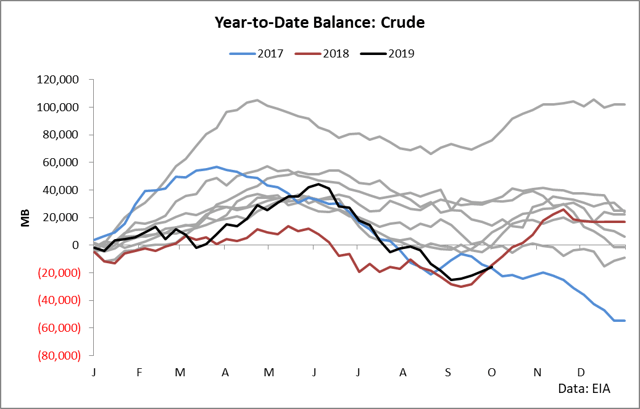 As we will discuss in a bit, the reason why I believe that this will occur largely has to do with the supply side of the balance. Demand is poor while supply is weak. This interesting situation leaves the market seriously vulnerable to upside risk on either a supply disruption or even a moderate uptick in demand.

Let’s start with the bad news for oil bulls: demand is terrible. As seen in the following five-year range of crude utilization, we have ended the summer driving season with one of the lowest levels of utilization seen in many years. 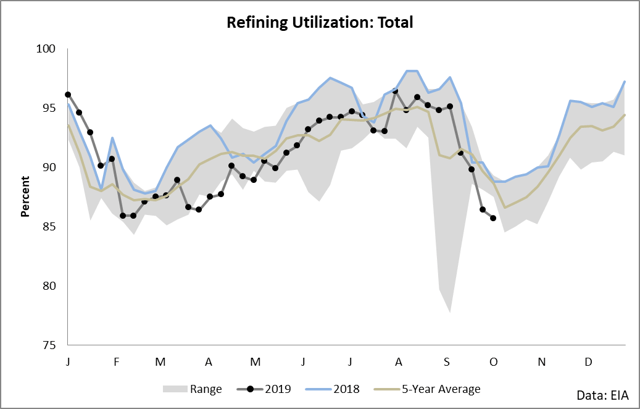 The reason for this weakness in utilization has to do primarily with the gasoline markets. We simply have too much gasoline in stocks and refineries are running at lower levels to keep from oversupplying the market. 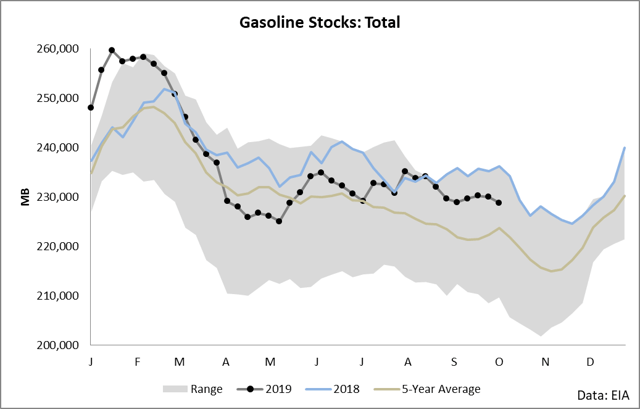 The underlying reason why we have such high stocks has to do with the fact that the economy has been generally slow. With a weaker economy, there is less business and personal driving, which results in fewer barrels of gasoline being consumed. As long as the economy remains weak, driving demand will remain weak and gasoline stocks will generally be elevated. I believe that long-term factors like the PES refinery explosion will sap the market of supply, but it can take lengthy periods of time for the effects to be felt.

The other side of the demand equation has to do with exports. Exports have remained strong and I believe that they will remain strong going forward. 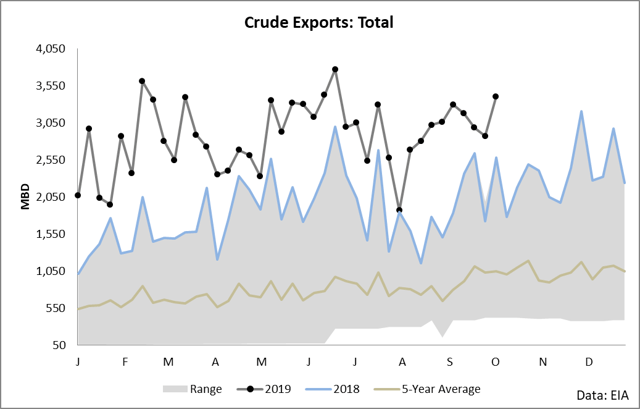 The reason why I believe that exports will remain strong is due to the fact that we have seen elevated and growing exports, even with the Brent-WTI spread contracting by around $6 per barrel over the last few months. 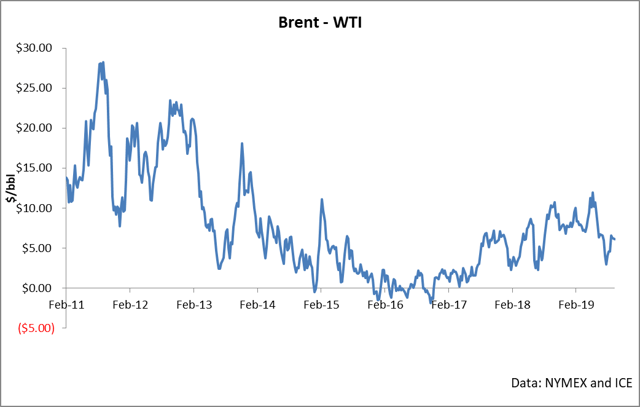 The basic export economics require a large enough spread to move barrels from the United States, and the market has demonstrated a willingness and ability to keep the barrels flowing even with volatility in key market spreads.

The supply side is currently driving much of the volatility in the crude balance. From a production standpoint, barrels continue to come from the ground at a growing rate. 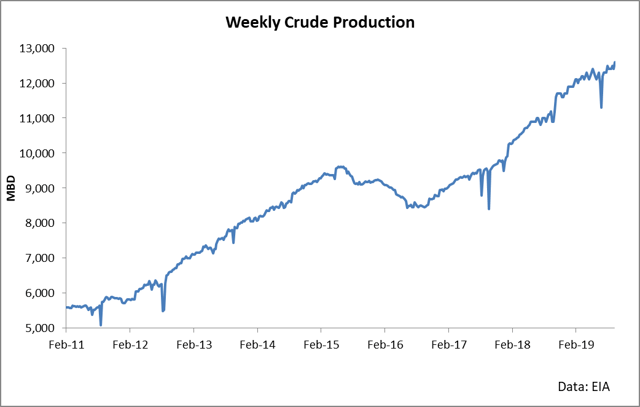 There is some concern that production growth is slowing, but my base case assumption is that growth will continue at the same rate it has been. In other words, I believe that growth will continue into the future for at least the next few years. And despite this growth in production, I still believe the supply side is the weakest side of the balance.

The reason why supply is so weak has to do entirely with OPEC. Put simply, OPEC is dictating the long-term trends of crude oil stocks in the United States. To arrest the price decline of late 2018, OPEC initiated production cuts. These cuts were extended in the middle of this year through March of 2020. 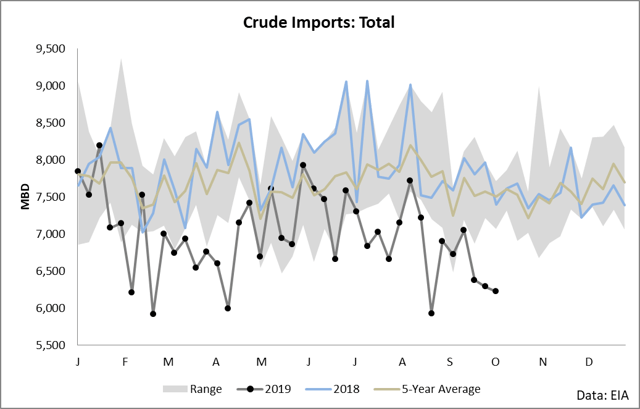 The fact that OPEC is the driving force here can be clearly seen through a breakout of imports by origin country. 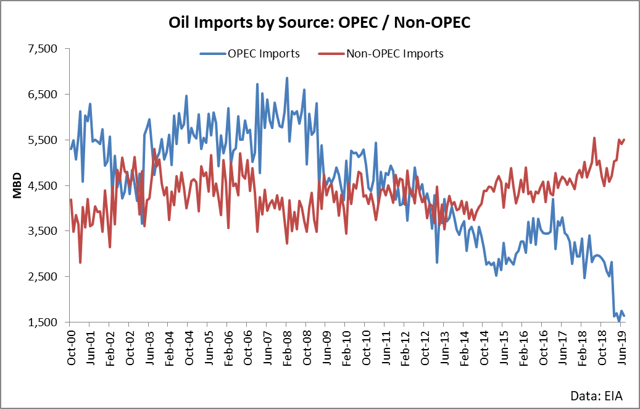 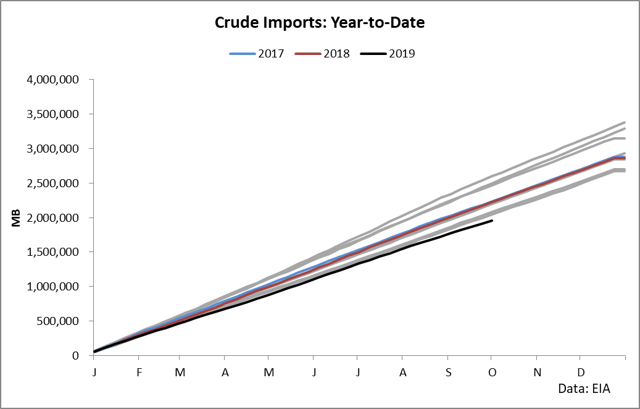 Canadian imports have attempted to step in and fill the gap as evidenced by the gains in PADD 2 imports. 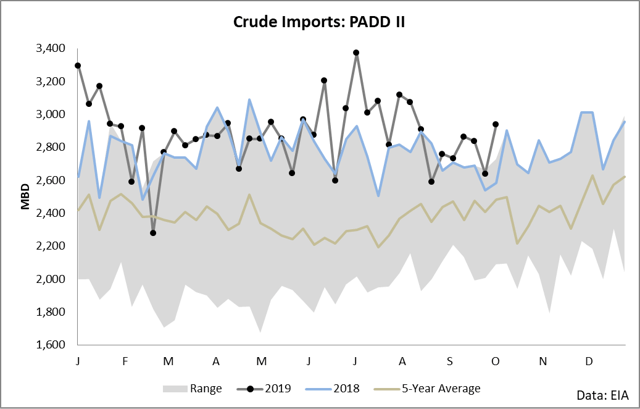 But the overall story remains: OPEC has curtailed production, and the world supply and demand balances are feeling the impact.

Here’s a quick recap of the fundamentals:

If you look at the above summary, you’ll notice that the underlying fundamentals for crude oil are largely bullish. This bullishness has been felt by an incredible decline in crude stocks earlier this year as well as the forward curve remaining in backwardation. And all of this has been happening with poor demand.

Imagine an even slight uptick in the economy. If we see a few months of positive growth in refining demand and crude runs even come back to the five-year average, crude stocks would rapidly decline and the price per barrel would surge due to the ongoing OPEC cuts sapping the market.

There is very real upside risk to crude oil. I do not believe the market is pricing this in. I do not believe the market is seeing the fact that the large drawdown in stocks which happened in May through August (one of the largest drops ever seen) occurred simply due to slightly above-average refining runs. If we see an uptick in refining demand due to a brightening economy, crude stocks are poised to collapse rapidly and the price per barrel to rise. The risk is to the upside, and traders should consider going long crude oil.

There are no upcoming events at this time.