Gazprom Neft is the fourth-largest oil producer in Russia, aiming to join the 10 largest producers of liquid hydrocarbons in the world by 2030.

There is evidence that the owner of 96% of Gazprom Neft will increase free float. This will result in share inclusion in major stock indices.

Gazprom Neft shares have a 30% upside.

Gazprom Neft (OTCQX:GZPFY) is a vertically integrated oil company primarily engaged in oil and gas exploration and production, refining, as well as the production and sales of petroleum products. The company is the leader of the Russian oil industry in terms of efficiency.

Gazprom Neft is one of the industry leaders in Russia

Gazprom Neft is #4 in oil production in Russia:

Gazprom Neft is #4 in gas production in Russia. Taking into consideration Gazprom and Novatek, Gazprom Neft ranks second among oil companies, with only Rosneft (OTCPK:RNFTF) ahead of it:

Gazprom is #3 in refining in Russia: 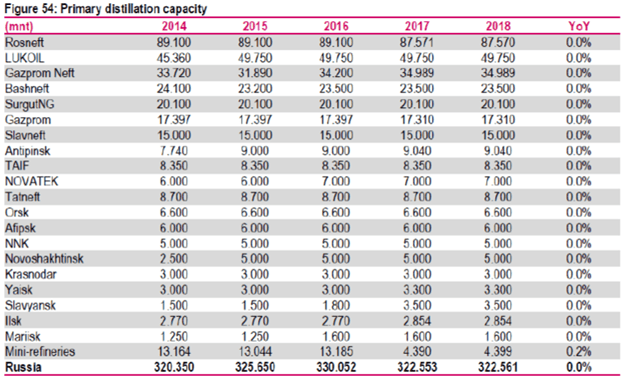 Gazprom Neft adopted the 2030 strategy in 2018, which featured the following goals:

Gazprom Neft is looking to considerably boost its profit through the increase in business margins and revenue. Having achieved the first three goals, the company will improve its profitability: Gazprom Neft is seeking to turn into the company with the biggest ROE in the sector. In addition, the company is planning to step up production and maintain its growth in line with the industry indicator.

Gazprom Neft is banking on technologies. Here are the results of the implemented projects (from the presentation of 1Q19 financial earnings):

Notably, all the goals included in the previous development programme have been attained, some of them prematurely, thus, the company’s management has enjoyed trust of minority shareholders for a long time.

Gazprom Neft has been boosting its profit and dividends

Gazprom Neft has been improving its dividend policy against the backdrop of rising profits. The company is looking to pay out 50% of its net profit as dividends. The company set the 4th record in a row in terms of net profit in 2018. The company’s CFO is expecting an upward trend in 2019 results compared to 2018. This cautious wording could mean that the company’s financial results may reach new heights.

Gazprom Neft will present its IFRS earnings on November 18. Given the data released by the company, it is possible to forecast the operating results.

Gazprom Neft continues to develop at a rapid pace, demonstrating an uptrend in upstream, refining, as well as sales (premium sales segments are expected to show double-digit growth again). 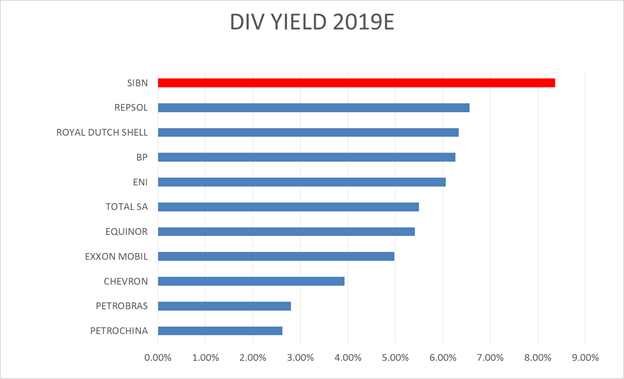 Gazprom Neft DPS is expected to grow 5 times in 4 years in 2019. This is due to both profit and payout ratio increase:

An increase in free float through SPO

The best part of Gazprom Neft investment story is that it yet has to be included in major stock indices, which may result in a significant share price increase. Gazprom Neft has not been included either in RTS or MSCI due to a low free float ratio, which will change after a part of Gazprom’s (OTCPK:OGZPY) stake is sold.

Gazprom, which is one of the largest contributors of dividend payments to the Russian budget, is going to pay out 50% of its net profit as dividends. Gazprom is likely to find it hard to pay record-high dividends in the current circumstances, while there are not lots of ways for the company to generate a larger net profit – this means, total revenue is not likely to go up (due to the above-mentioned factors). The ways to raise its profit left are: a decrease in capital expenditure, eliminating possibilities for the management to accumulate wealth through construction projects, the general efficiency enhancement, and, of course, selling stock.

The first three options are rather complicated, they take time and efforts, while selling stock is the simplest way to get cash, which is vitally important for Gazprom to pay out dividends and fulfill its promises. Gazprom has already sold a batch of treasury stock, there are batches of Gazprom Neft and Novatek left.

Gazprom Neft is Gazprom’s major non-core asset. Gazprom possesses a 96% stake that costs 1.9 trillion roubles. Gazprom’s selling treasury stock has demonstrated that the company is interested in selling its batch to one key player (strategist). If Gazprom Neft’s stock is also sold to a strategist, a solid premium to quotes can be expected.

Selling a minority stake in Gazprom Neft is the best way to generate cash for Gazprom. Gazprom owns 96% of Gazprom Neft that costs 1.9 trillion roubles: 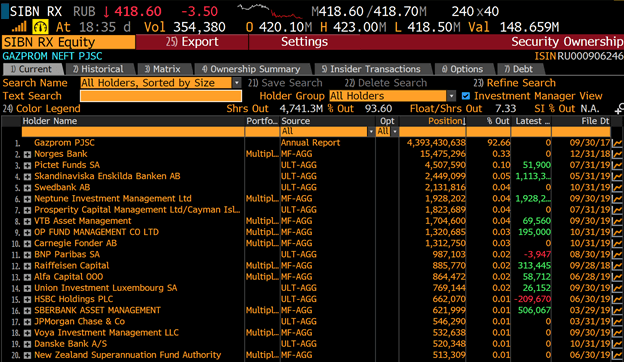 Once the stake is sold, Gazprom Neft’s free float and shareholder value will move up, as the stock will be potentially included in the indices and become attractive for passively-managed funds or major institutional investors that cannot hold a large position in the stock now and do not favour the stock due to its low liquidity. Consequently, this will stir up interest of new investors, and prices will start climbing.

Given all its indisputable advantages, Gazprom Neft’s low valuation is the result of its low free float. Gazprom Neft is considerably undervalued compared to global majors: 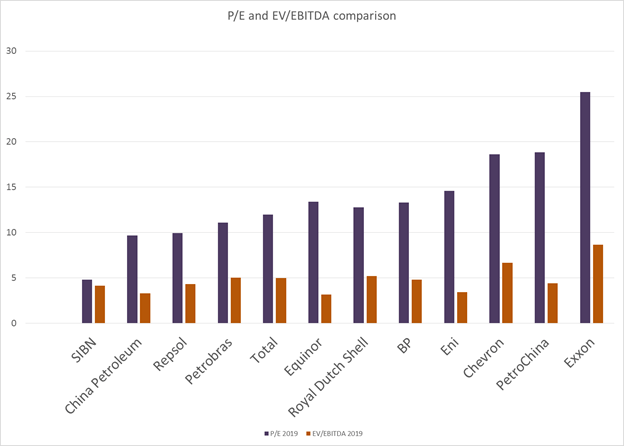 Hence, Gazprom Neft is a transparent company with an ambitious development programme aimed at creating shareholder value. The company has been increasing dividend payments (both through higher profit and payout ratio). Gazprom Neft’s SPO looks logical as it will lead to a higher free float and arouse interest in the stock, which will again boost value.

With the forecasted dividend in mind, a simplest valuation (annual earnings divided by the Russian Central Bank’s benchmark rate) will result in the price per Gazprom Neft’s share of USD 8.4 (RUB 544).